In the 18 July 2014 issue of Science, Kendra Smyth reviews the new book “The Sixth Extinction” by Elizabeth Kolbert.  The book documents past mass extinction events and situates the present loss of biodiversity — due to human activity — within this context.

If it is the case — as Smyth writes — that “with warp speed humans are responsible for transforming the biosphere” and that “humanity is busy sawing off the limb on which it perches,” then this state of affairs would seem to draw attention to certain un-examined assumptions behind statements like “humans have succeeded extravagantly.”

Specifically: perhaps our characteristic intelligence is not at all a survival advantage, but rather a genetic fluke, and the relative youth of our species (behaviorally-modern humans are roughly 50,000 years old) may then simply indicate that natural selection hasn’t yet gotten around to knocking us off the food chain. Perhaps this is a hypothesis better left untested.  Perhaps we’re only “succeeding” insofar as we’re eliminating ourselves faster than natural selection eliminates other species.

It would also seem that the West’s post-Renaissance preoccupation with technological progress conceals an irrational vestige of our religious heritage: an irrational faith in a technological savior to the eschatological trajectory of technology. That is, we eagerly anticipate a technological solution to the problems created by technology.  Given that modern technology is only 300 years old (beginning with the Newcomen engine in the early 1700’s) there is very little evidence in the history of the human race to support the view that technology will solve the problems of technology, making such beliefs very much an article of faith.

To quantify the aforementioned state of affairs, it may be worth beginning with an honest discussion of the heresy of diminishing returns. If one looks at the productivity of the US healthcare system, for example, we see a straightforward diminishing returns curve:

The meaning of the above chart is that relatively few medical innovations have made a substantive difference in quality of life and overall health outcomes: sanitation and hygiene (in the mid-1800’s, Ignaz Semmelweis at Vienna General Hospital decided that doctors should wash their hands), anesthetics and analgesics (patients used to die of shock during surgery), antibiotics (developed for around $20,000 of basic science research), and the vaccine. Since then, modern medicine has been largely concerned with addressing the problems of technological civilization, such as poor diet, sedentary lifestyle, and environmental pollution. And medicine has been growing exponentially more expensive.  Unfortunately, there are few patents to be found where a change in cultural values is what is needed: you can’t patent a healthy diet and exercise, so well-funded science turns its attention elsewhere.

Although diminishing returns is a well-documented economic phenomenon, it receives scant discussion in the mass media, which is otherwise filled with breathless accounts of the latest and greatest gadgets.  The phenomenon is by no means limited to the healthcare industry, but appears throughout the economy.  If one looks at, for example, the cost per patent over time, a similar curve emerges: 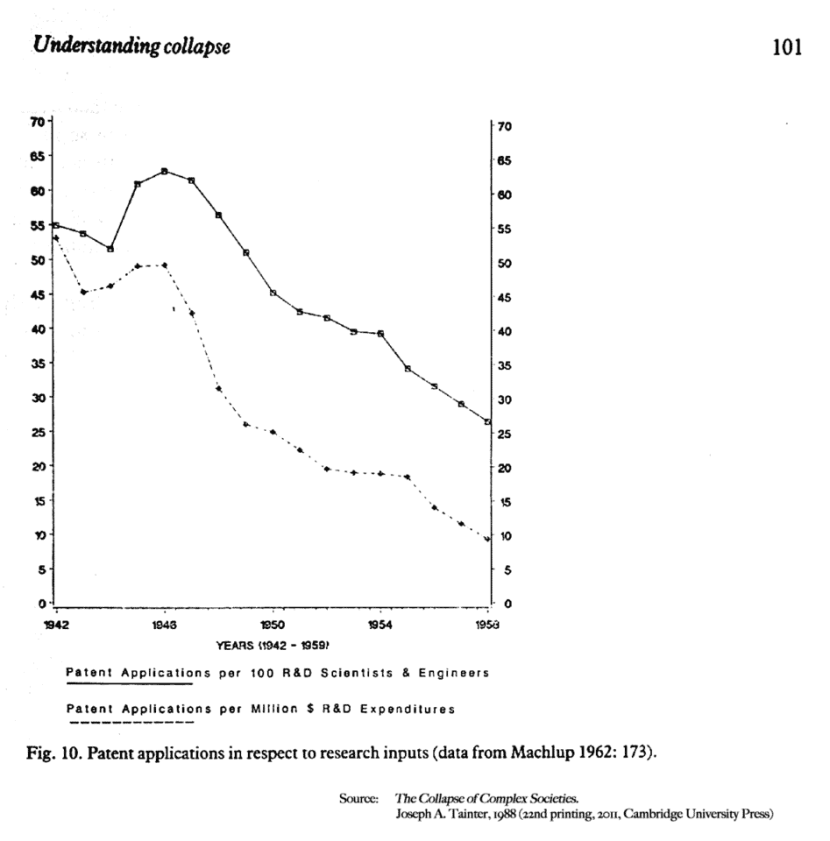 The above chart illustrates a simple point: patents get more expensive over time because most of the easy and most pressing problems get solved first.  The diminishing marginal utility kicks in as more specialized patents affect fewer numbers of individuals, in contrast to patents with a more broad applicability that affect many people.

Here is what diminishing returns on investments in technology mean in cultural terms:

Fracking is a new energy extraction technology with many harmful consequences, including heavy water use, irregular seismic activity, and environmental pollution.  Fracking is becoming an increasingly popular way of extracting energy for two main reasons: politically, Americans don’t want to depend on foreign energy sources; and, culturally, Americans want to persist in destructive, wasteful habits.  Driving in automobiles is inherently wasteful, as over 2/3 of the energy purchased as gasoline is not converted into motion, but rather lost as waste heat.  Fracking is a harmful technology designed to preserve a wasteful mode of transit for cultural reasons.  Busses (measured in passenger miles per gallon), trains, and urban living are by far more energy efficient and less environmentally costly.

Many Americans delude themselves about their habits by purchasing “green” products like hybrid automobiles.  While hybrids produce fewer emissions while in operation, they are more complex than conventional automobiles, use more energy-intensive materials, and they rely on toxic chemicals for their batteries, so that, on the whole, they may actually produce more pollution than typical internal combustion engines.  If one purchases a hybrid with the goal of reducing carbon emissions, one would do better to adopt a vegetarian diet.  Doing so reduces carbon emissions, reduces antibiotics use, lowers medical costs by improving diet, and reduces animal cruelty, without further concentrating wealth in the hands of the industrial system that profits from marketing “green” products that aren’t actually all that “green.”

Dietary modification, despite its advantages, requires self-control and a change in cultural values.  Unfortunately, scientific and technological “progress” plays the role of an enabler for bad habits.  These bad habits seem poised to wipe our species off the face of the planet.